Essential Caregivers and Visitors are welcome at SAH. Some restriction remain, click here to learn more.

Sault Area Hospital (SAH) has a long and storied history in Sault Ste. Marie and remains an important cornerstone in the community.

SAH began as two community hospitals on Queen Street – the Sault Ste. Marie General Hospital Inc. (Catholic) and the Plummer Memorial Public Hospital (public), forming a partnership in 1993. Sault Area Hospitals was selected as the partnership name in 1996 and then in 2001, the provincial government announced support for a new hospital in the north end of the City and the formation of a single hospital corporation – Sault Area Hospital.

In 2002, SAH held its inaugural meeting of a single corporation. From 2002 to 2007, planning was underway to build a new facility. The new SAH was the largest public construction project in the history of Sault Ste. Marie. In August 2007, SAH signed a contract with the consortium Hospital Infrastructure Partners (HIP) to build, finance and maintain the new facility.

An official groundbreaking ceremony was held on August 23, 2007, and was well attended by hospital staff, physicians, volunteers, donors and political representatives including Premier Dalton McGuinty. Construction followed and the new building was delivered ahead of schedule and on budget.

What began as an ambitious vision for the community, culminated with the much-anticipated opening of our new state-of-the-art facility on March 6, 2011. The new SAH is located in the north end of the city on Great Northern Road at Third Line, adjacent to the F.J. Davey Home, replacing the existing two facilities on Queen Street and consolidating services in a facility that is now 20 percent larger than the two former hospitals combined.

After years of deliberation, planning, construction and hard work, SAH began a new chapter in-hospital care history in March 2011. The modern facility will serve Algoma District residents for generations to come and represents a shining example of what can be accomplished by working together toward the same goal – a better future for the people of Algoma.

The construction of the new hospital could not have been possible without the support of the provincial government, Infrastructure Ontario, the City of Sault Ste. Marie and surrounding Algoma municipalities, the North East Local Health Integration Network (NE LHIN) and generous donors who collectively contributed almost $60 million! 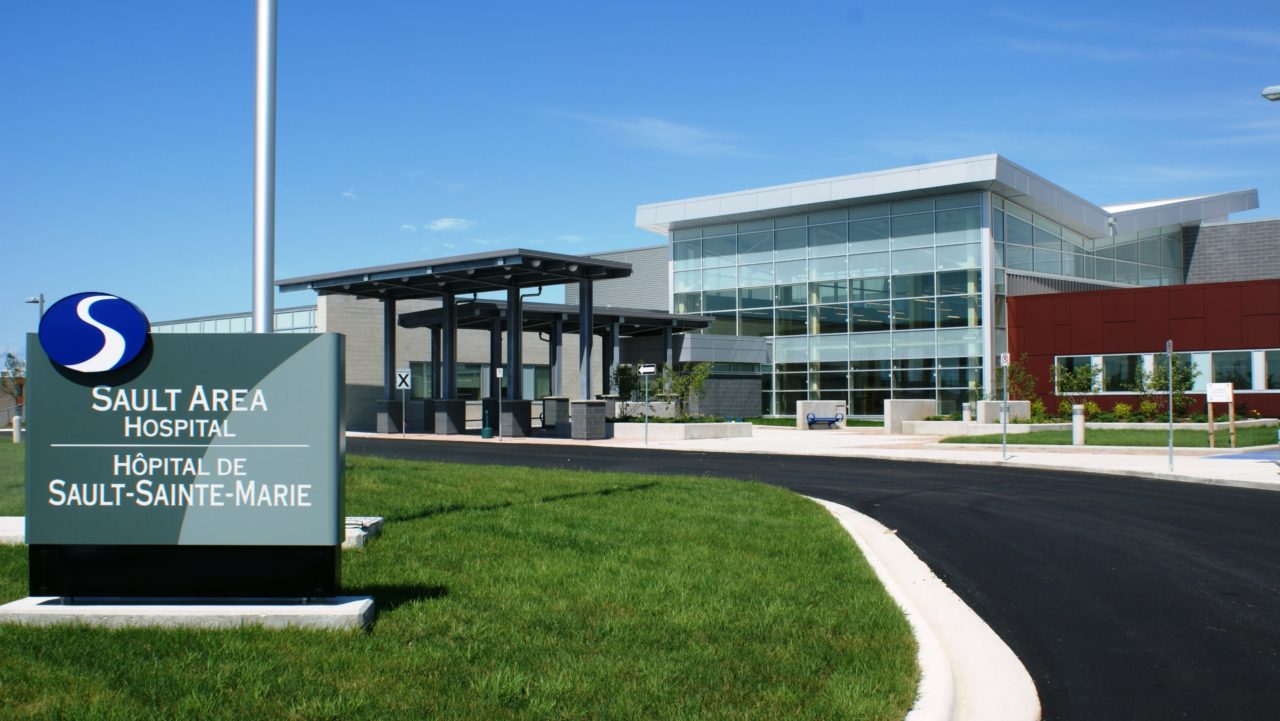 The General Hospital was founded in 1898 by the Grey Sisters of the Cross from Ottawa. Taking their inspiration from their foundress, Marguerite d’Youville, their mission was to serve the poor and sick.
The Sault Ste. Marie town fathers had turned to the Grey Sisters on the advice of the provincial Inspector of Asylums and Prisons who urged them, “If you wish a hospital of which the work is serious and lasting, ask the Grey Sisters.” They began their work first in a house on Bay Street, then in a newly-constructed 80-bed hospital at the former Queen Street location.
In 1926, ownership was transferred to the Pembroke-based Grey Sisters of the Immaculate Conception. The hospital grew with the city and new wings were added in 1908 (the same year the nursing school opened), 1922 and 1953. In 1963, following a joint fundraising campaign with the Plummer, the hospital was almost completely rebuilt. The General Hospital celebrated its centennial in 1998, transferring sponsorship that same year to the Catholic Health Corporation of Ontario.
Throughout its history, Marguerite d’Youville’s spirit of love and compassion for one another and for the poor, the sick and the orphan, has inspired the many caregivers who have dedicated their lives to healing the sick.

The Plummer Hospital had its beginnings in 1906 when a group of citizens founded the Algoma Benevolent Hospital Association. Eleven years later, in 1917, through the efforts of association president Frank Davey and auxiliary president Mrs. R.C. Smith, the association established the first non-sectarian hospital in northern Ontario.
The 18-bed hospital first opened in a house on Albert Street East, with the nursing school opening one year later in 1918. In 1920, the family of the late W.H. and Maria Plummer donated their family home Lynnhurst, and the hospital moved to its Queen Street location, changing its name from the Royal Victoria to the Plummer Memorial Public Hospital.
Population growth led to additions to the hospital in 1929 and 1952, and in 1959, the nurses’ residence (now Riverview Centre) was completed. In 1962, Lynnhurst was demolished, and the Plummer, in cooperation with the General, completed major renovations.
In 1984, the two Red Cross Hospitals in Thessalon and Richards Landing came under the umbrella of the Plummer Hospital. In 1994, the Plummer opened the Renal Wing, the last local hospital addition of the 20th century.
Throughout its history, the Plummer has remained committed to providing community-based programs which provide for the needs of the residents of Sault Ste. Marie and surrounding communities.